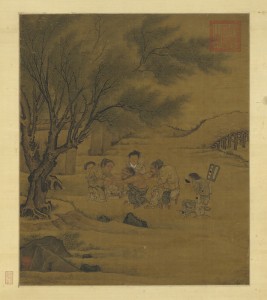 Terminology[edit]
The first Western remarks on moxibustion can be found in letters and reports written by Portuguese missionaries in 16th-century Japan. They called it “botão de fogo” (fire button), a term originally used for round-headed Western cautery irons. Hermann Buschoff who published the first Western book on this matter in 1674 (English edition 1676) used the Japanese word mogusa. As the u is not very strongly enunciated, he spelled it “Moxa”. Later authors blended “Moxa” with the Latin word combustio (burning).[2][3]

The name of the herb Artemisia (mugwort) species used to produce Moxa is yomogi (蓬) in Japan and ài or àicǎo (艾, 艾草) in Chinese.[4]

The Chinese names for moxibustion are jiǔ ( 灸) or jiǔshù ( 灸術), Japanese use the same characters and pronounce as kyū and kyūjutsu. In Korean the reading is tteum (뜸). Korean folklore attributes the development of moxibustion to the legendary emperor Dangun.[5]

Theory and practice[edit]
Practitioners use moxa to warm regions and meridian points[6] with the intention of stimulating circulation through the points and inducing a smoother flow of blood and qi. Some believe it can treat conditions associated with the “cold” or “yang deficiencies” in Chinese Medicine.[7] It is claimed that moxibustion mitigates against cold and dampness in the body, and can serve to turn breech babies.[8]

Practitioners claim moxibustion to be especially effective in the treatment of chronic problems, “deficient conditions” (weakness), and gerontology. Bian Que (fl. circa 500 BCE), one of the most famous semi-legendary doctors of Chinese antiquity and the first specialist in moxibustion, discussed the benefits of moxa over acupuncture in his classic work Bian Que Neijing. He asserted that moxa could add new energy to the body and could treat both excess and deficient conditions.

Practitioners may use acupuncture needles made of various materials in combination with moxa, depending on the direction of qi flow they wish to stimulate.

Medical research[edit]
The first modern scientific publication on moxibustion was written by the Japanese physician Hara Shimetarō who conducted intensive research about the hematological effects of moxibustion in 1927. Two years later his doctoral dissertation on that matter was accepted by the Medical Faculty of the Kyūshū Imperial University.[10] Hara’s last publication appeared in 1981.[11]

Randomized controlled trials have found that moxibustion alone,[12] in combination with acupuncture, or in combination with external cephalic version may be effective at changing breech presentation of babies. The proposed mechanism of action is that moxibustion causes the release of placental estrogen and prostaglandins, which lead to uterine contractions that change the baby’s position. A Cochrane Review of these studies found that they differed too greatly to perform a meta-analysis and called for more experimental trials.[13]

Moxibustion has also been studied for the treatment of pain,[14] cancer,[15] stroke,[16] ulcerative colitis,[17] constipation,[18] and hypertension.[19] Systematic reviews have found that these studies are of low quality and positive findings could be due to a publication bias.[20] According to the American Cancer Society, “available scientific evidence does not support claims that moxibustion is effective in preventing or treating cancer or any other disease”.[1]